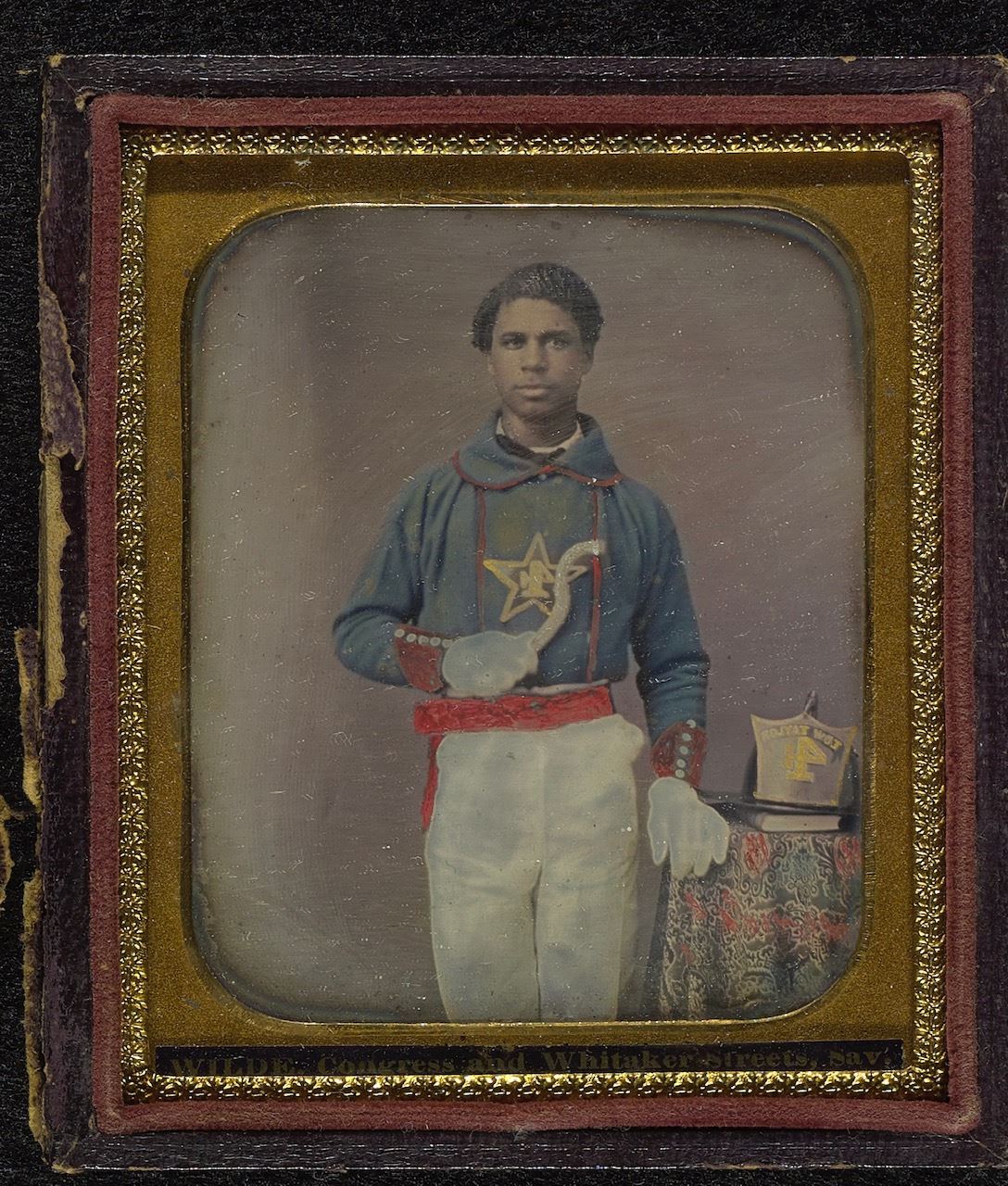 The Savannah Fire Department is older than the United States of America. Savannah’s first fire company was formed in 1759 when Georgia was still a British Colony. Citizens began to focus on fire safety after a profitable silk processing factory and 7,040 pounds of silk cocoons were destroyed by fire in 1758. At that time the City of Savannah was bound by what is now Jefferson Street to the west, Lincoln Street to the east, Oglethorpe to the south and the Savannah River to the north. Within that small space were 6 squares, 12 city streets, Christ Church, an independent meeting house, a council house, a courthouse, the silk factory and 400 homes made entirely of wood -including the chimneys.  So in 1759 the fire conscious community purchased a hand engine, appointed 15 volunteers to fight fires and implemented the first fire ordinance. The Savannah Fire Department was born.

Firefighting in the 1700s
The fire ordinance prohibited the repair or construction of wooden chimneys. Violators were fined five pounds sterling. The fines were used for fire engine upkeep. Soon after, a fire tax was levied on each property based on the number of hearths in the home. The tax revenue was used to purchase 50 leather water buckets and 15 fire hooks. The following year, in 1760 every homeowner was required to have a ladder the height of their house in case of a fire. The fire ladder ordinance remained in effect from 1760 to 1796 - through the Declaration of Independence, the Revolutionary War and the signing of the U.S. Constitution.

When Savannah’s first Board of Aldermen was elected in 1790 their first act was to improve fire service, which was made up of volunteer fire companies that used publicly funded equipment. The city dug wells and built cisterns in the squares and purchased fire engines. The first fire house was built in 1791 and by 1794 two more volunteer fire companies had organized. But two years later, in 1796, a fire in a bake shop spread through Savannah destroying 229 buildings, including Christ Church, the colony’s first house of worship. Hundreds of people were left homeless and unemployed in the wake of the fire. The following year, in 1797 City Council elected 10 fire masters to better organize fire scenes and services. By 1803 The Savannah Fire Department had 7 fire engines, and in 1807 a fire boat was added to the fleet. The publicly funded firefighting apparatus and equipment was housed in station houses, squares and markets throughout the City to provide quick access.

In 1820 Savannah experienced its second devastating fire. This one destroyed almost everything between Broughton and Bay streets, from Jefferson Street down to Abercorn. The fire burned for eight hours and destroyed 463 buildings. At the time, it was the largest fire on record in the United States. Fire safety became an even greater priority.

African-Americans & Professionalization
In 1821, the year after the great fire, free men of color joined in Savannah’s volunteer firefighting force, forming Franklin Fire Engine and Hose, and the Union Axe and Fire companies.  But fighting fires was extremely dangerous, grueling work and the volunteer companies were free to pick and choose which fires they wanted to fight. In order to attract more firefighters on a consistent basis the City began offering financial rewards to the first fire company to put water on a fire.  Then, in an effort to organize and professionalize Savannah’s firefighting forces, City officials organized a city-managed fire company called Savannah Fire in 1824. The administrators were white and all of the volunteer firefighters were black. All publicly funded fire houses, equipment and apparatus were turned over to Savannah Fire Chief Robert Campbell. Chief Campbell oversaw all fire scenes and distributed $30 rewards among the various fire companies that responded. But the Savannah Fire Company, which he personally managed, was required to be trained and disciplined.

In 1825, the City took a census of all free African-American firefighters in Savannah between the ages of 16 and 60. Fire Chief Campbell selected free black men to volunteer in the Savannah Fire Company. Those he enrolled were required to report to all fire alarms, participate in monthly drills and maintain Savannah Fire Company equipment or face a $10 fine or up to 15 days in jail.  In exchange for their service, free firefighters of color were exempt from taxes and granted special immunities and privileges that were typically reserved for whites only.  All of Savannah’s volunteer fire companies were allowed to enlist the help of up to 12 enslaved men; however enslaved men had to be paid to fight fires and provided with a badge. They were also required to drill and participate in monthly parades and inspections. In return, enslaved firefighters were entitled to all the immunities and privileges of a fireman. Savannah Fire Rescue was granting unprecedented freedom and opportunity for enslaved black men 38 years prior to the Emancipation Proclamation.

In 1826 officials decided there weren’t enough volunteer firefighters to meet the City’s growing fire safety needs. The City passed an ordinance requiring payment of 12 and a half cents per hour to enslaved men who participated in fire drills and fought fires. The first to arrive at an engine house when a fire alarm sounded received a dollar. The second and third to arrive received 50 cents each. Those who failed to report to a fire alarm forfeited pay late or he was stripped of his fireman’s badge and privileges. By 1828 the Savannah Fire Department’s volunteer force consisted of 178 enslaved men, 96 free men of color, 17 white men, 8 fire engines, 1 hose cart and over 2,000 feet of hose. They had 274 buckets, 15 fire hooks, 44 ladders and 22 axes. The City’s fire losses plummeted.

Firefighting during the Civil War
By 1854 a central fire station at the corner of Oglethorpe and Abercorn was built. Today the site remains in use as the Savannah Fire Department Headquarters.  Savannah Fire Department firefighters worked through the Civil War. Enslaved firefighter pay rose from 12 and one half cents to 20 cents per hour because of the increasing demand for fire safety. In January of 1865, not long after Sherman’s troops marched into Savannah, a stable used to store Confederate ammunition at the current location of MLK Boulevard and Zubley Streets, caught fire. The Savannah Fire Department battled the blaze and removed ammunition with the help of U.S. Army troops. The fire ultimately destroyed 100 buildings on MLK Boulevard, Broughton and Congress streets. 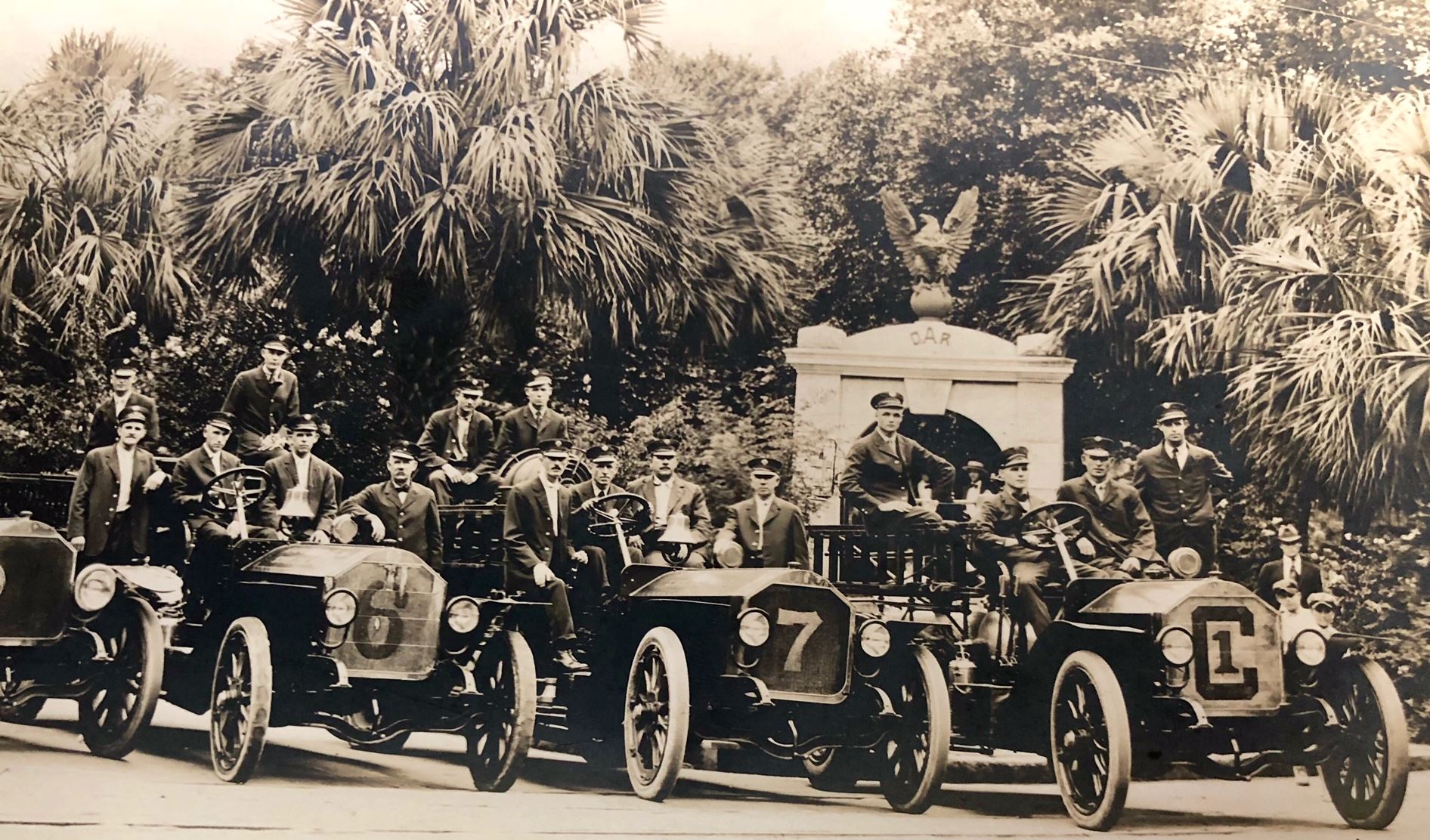 From the 1870s to the present, the Savannah Fire Department focused on technology and techniques that would modernize the department and improve public safety in Savannah. In 1870 a police and fire telegraphy system was installed.  In 1872 the Big Duke fire bell, named after City Council Fire Committee Member Marmaduke Hamilton, was purchased. Big Duke still stands in front of Savannah Fire Department Headquarters at 121 E. Oglethorpe. Between 1875 and 1890 the Savannah Fire Department phased out its volunteer companies and replaced them with full-time professional firefighters. Then in 1911 the City ordered 13 motorized chemical wagons to replace all of the department’s horse drawn apparatus, making the Savannah Fire Department the nation’s first fully-mechanized fire department. In 1923 the department implemented night and day shifts to improve working conditions for firefighters. And in 1929 Chief John H. Monroe invented the fire apparatus water tank. Chief Monroe’s water tank replaced soda-acid tanks that mixed bicarbonate soda, water and sulfuric acid to force water out of fire hoses. His fire apparatus water tank became the industry standard. By 1931 a telephone switchboard system had been installed to dispatch firefighters and in 1954 the department began using two-way radios in fire apparatus, cars and the dispatch center to improve communication.

Now, after 261 years of growth, change and improvement; the Savannah Fire Department is an accredited, ISO Class I fire department staffed by an international staff of 318 professional men and women.