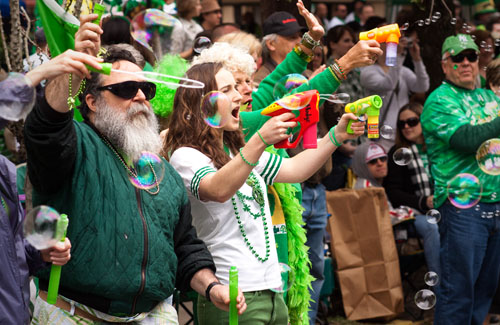 We may not have any advice for curing a green beer hangover or how to get your family to agree on the perfect parade-watching spot, but we do have some great tips to help make your St. Pat's experience safe, fun and citation-free:

Citations
Should you receive a citation for violating a city ordinance, it can be handled just like any other ticket. Chatham County residents may be released with a city ordinance summons. If you receive a summons, you can avoid a court appearance by paying the fine in advance at the Recorders Court window at the Chatham County Courthouse, 133 Montgomery Street. You can also pay traffic citations online at www.savannahga.gov/paycitations.

You always have the right to appear in court and plead your case. You will be given a court date when you receive the citation. Should you ignore it, you will be found in Contempt of Court.

Towed Cars
Police will mobilize the towing companies to remove cars from the parade route at 6 a.m. on Parade Day. All vehicles illegally parked in areas affected by the parade will be towed at owner’s expense. To retrieve your towed vehicle, the vehicle owners must obtain a vehicle release form from Savannah-Chatham Metropolitan Police Department (SCMPD) at West Chatham Precinct on Chatham Parkway, 295 Police Memorial Dr. Proof of ownership is required to obtain a vehicle release form from SCMPD.

Before parking, be sure that you are legally parked, and not obstructing any roads or driveways, especially around the squares and areas near the parade route. Understand that this will be Savannah’s most populated day of the year and parking will be at a premium, so be careful where you park. Parking Services and Metro will be ensuring that the roadways are open and unobstructed. Illegally parked cars will be ticketed. Vehicles that obstruct any roadway will be ticketed and towed at the owners’ expense.

Do not move barricades or remove “no parking” bags. Your vehicle will be towed and you will incur both towing and storage fees.